Current research in theoretical physics shows that the electroweak and strong interactions can be described by the Standard Model of particle physics, but they are still relatively independent and have not formed a unified model. In addition, gravitational interaction is essentially different from other interactions. The general theory of relativity describing gravitation is still a classical theory described by spacetime geometric dynamics, not a quantum theory. Therefore, it has always been the goal of theoretical physicists to find the quantum theory of gravitation and unify the electroweak interaction, strong interaction and gravitational interaction. In the search for a unified theory, Einstein made many attempts in the rest of his life, but failed. In recent decades, theoretical physicists put forward and developed the superstring theory, which is considered as a possible candidate for the unified theory. However, there is no final conclusion on this issue.

One hundred years after Einstein put forward the Unified Field Theory, Yueliang Wu, academician of Chinese Academy of Sciences (Director of ICTP-AP, Director of Taiji Laboratory for Gravitational Wave Universe of UCAS, and Director of Academic Committee of the Institute of Theoretical Physics, CAS) has completed the systematic research work of The Foundation of the Hyperunified Field Theory. It opens up a new way to reveal the basic composition, symmetry and basic interactions of nature, the essence of spacetime and gravitation, and the origin of matter and the universe. It is a new attempt to the unified theory.

The exploration and research of The Foundation of the Hyperunified Field Theory breaks the usual thinking formed since Einstein’s theory of relativity. Instead of starting directly from the existing concepts of symmetry, spacetime and its geometry, it takes the concepts of matter and motion as the basic starting point, that is, nature is composed of fundamental building blocks, which have intrinsic structures and are in motion constantly, and their motion is simple and regular. In order to realize such concepts of matter and motion reasonably and consistently in physics, The Foundation of the Hyperunified Field Theory takes the action principle of path integral formulation, which has been successfully applied to quantum field theory and classical physics, as its theoretical form system, the maximum coherence motion principle and locally entangled-qubits motion principle, together with the principle of scaling and gauge invariance are proposed and served as the foundation of hyperunified field theory.

Starting from the basic matter field and motion concept and based on the existing physical phenomena and experiments, The Foundation of the Hyperunified Field Theory puts forward the basic guiding principles for establishing hyperunified field theory. Through detailed physical analysis and systematic theoretical deduction and induction, it can solve a series of long-standing basic problems in fundamental theoretical physics. For example, why are the fundamental building blocks of nature presented as spinor fields? What is the fundamental symmetry of nature and how it came into being? What is the basic attribute of spacetime and how it is embodied? How to determine the spacetime dimension of nature? Why time is different from space, and time is one-dimensional? Why there are more than one generation of leptons and quarks in nature? Why is the material world observed a four-dimensional spacetime universe? Whether the four basic interactions known in nature can be dominated by unified fundamental symmetry? What is the essence of gravitation and how it is characterized by hyperunified fundamental symmetry? What is the essence and structure of spacetime? How to understand the origin and evolution of the universe and how the early inflation of the universe occurred? What are the properties of dark matter and whether its existence implies new interactions in nature? What is the essence of dark energy and whether its presentation comes from new interactions in nature? Why today’s universe presents parity breaking and asymmetry between matter and antimatter? Whether the unified description of the fundamental laws of physics is uniquely determined by the concepts of matter and motion, and what kind of energy concepts, spacetime concepts, geometric concepts and cosmic concepts it will lead to? 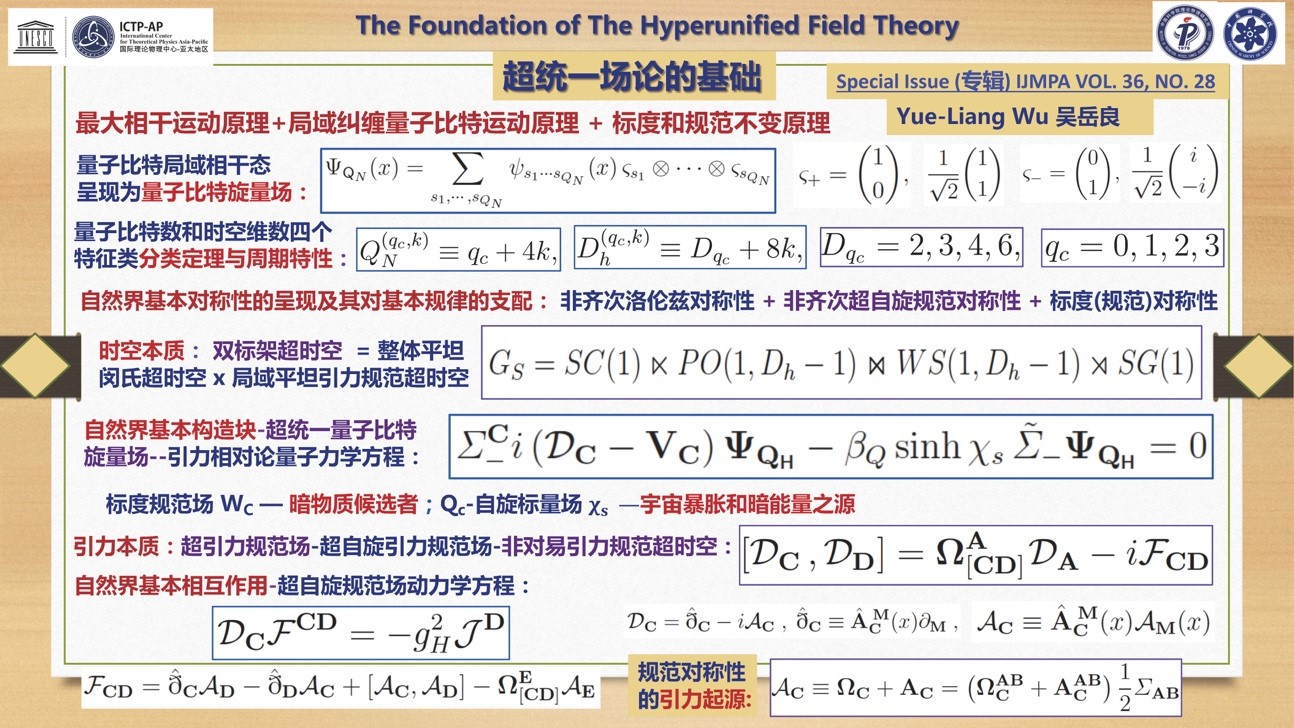 He was invited to give talks on related work at the 2020/2021 Autumn Conference of Chinese Physical Society and the 28th International Conference on Supersymmetry and Unification of Fundamental Interactions (SUSY2021):

Please use your SEP account to login here. If you don't have an account please switch to standard login.